Many people worldwide have a generator installed to run their house when disaster strikes. If you want to buy a generator to run your house, you may wonder about the correct wattage to invest in.

Standby generators typically range from 7kW-60kW, and it’s possible to work out how many watts the generator needs to produce to run your house.

The wattage requirement of all the appliances you want to run will indicate how many generator watts will be required to run your house. To comfortably run most of the essential appliances of a house, you will need a 20-25KW generator, whereas a fully powered house will require a 35KW+ generator.

Here are some of the key points that I’ll cover, plus more you’ll need to know:

When you are prepared to make do with only a few bare essential appliances, the watt requirement will allow you to invest in a smaller watt generator like a 10KW.

It all boils down to how comfortable you want to be when the main grid shuts down. Bigger is better when it comes to choosing a standby generator.

How Many Generator Watts To Run A House?

Investing in a generator that offers increased power capacity, ready to step in when power from the main grid decides to step out, is a smart move from your side.

Power cuts and outages due to storm damage, or maintenance being performed, is on the rise.

Any modern home has appliances that need to run when darkness, and powerlessness, set in.

The main question to answer, before you spend any money, is how much watts do your home’s appliances require to keep on running?

Another burning question: Do you want to power your whole house (what power cut?), or only partially (a few selected appliances)?

How To Work Out Your Home’s Wattage Requirement

The most efficient way to work out the confirmed wattage requirements of your home is to hire a professional electrician to do the arithmetic.

See also  Is A Generator AC or DC? (Different Types)

If you don’t want to spend extra money on such a service, you can work out a guestimate yourself using a Generator Wattage Calculator.

When calculating the wattage requirements of your home’s appliances, it is good to know that there are two types of watts that you need to record:

What Is The Difference Between Starting and Running Wattage?

It is important to understand the difference between running and starting wattage when you use your math skills or a calculator (best option) to calculate the ideal size of your generator.

Starting wattage, commonly referred to as “surge wattage,” refers to the amount of power (watts) that it takes to start a device.

Starting watts usually applies to bigger appliances, with motors that require extra surge wattage to start, like the following:

The starting wattage is normally 2-3 times the running wattage of the appliance, and this surge of wattage is often needed for only 3-5 seconds to kickstart the machine.

For these machines’ motors to startup, it will require a short/brief boost of power to kickstart their “engines.”

You get to decide and choose which appliances you want to start up and run whenever a blackout occurs.

How To Calculate Your Home’s Wattage Requirement

The wattage requirement of each home will slightly differ from the next because of the running and starting watts of different appliances.

Some people buy a generator to keep essential appliances running- air conditioners, refrigerators, sump pump, and a couple of lights- while others want their whole house to be powered-as if there’s no power outage occurring.

The recommendation when purchasing a generator is that you buy one that can power your full house, with some extra power as backup, so as not to damage the generator by continuously running at its peak load.

Whatever your budget allows for, you can calculate your power requirement by using the following easy steps:

Start by making an in-depth list of all the appliances you want functioning when the lights go out.

See also  Will A 20KW Generator Run My House? (Here's How)

Include all appliances you expect to use, or want to keep functioning, leaving out the ones you can bear to be without.

A different way of calculating your home’s power requirements, or generator needs, is to calculate according to the size of your home.

You can use the following online home generator sizing calculator to get an idea of the peak load requirements, or do the math yourself by following the averages below:

The above metrics will help you understand the power you will require before investing in a generator. Let us look at some examples:

Example Of Wattage Per Appliance

The following is a list of typical appliances that need to be powered in a house and the wattage of each one:

The above example indicates that you will require a generator capable of generating 36 740 W. The total running watts are added up, together with the appliance with the highest starting watts.

See also  Run A Generator Without A Load (Must-Read)

In most cases, only one item will cycle or start simultaneously, making this the most accurate estimate. A generator of 38,000 W would be recommended in this scenario.

When purchasing a generator, you must know the following numbers and their meaning:

An Example Of Powering Essential Items Only

Instead of the full power scenario explained above, let us look at an example of how to work out what generator you will require when essential power is required.

In the above example, where only some essential appliances are powered, you would require a smaller powered generator. In this case, a generator capable of producing 13,000 W would suffice.

After working through the information mentioned above, and you are sure of your home’s specific power requirements, it’s helpful to know which generators on the market are considered a good investment.

Generac is one of the leading in the home standby generator market. With the Generac Guardian Series of generators that range from 10-24KW, they have ensured to keep the homeowners looking to power only essential appliances and looking to power a moderately small home fully covered.

Special features included in these generators are: 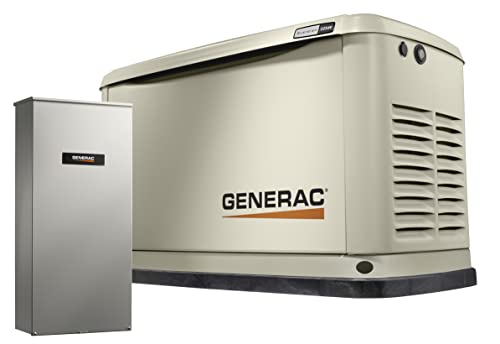 Generac’s Protector Series is about small units packing a massive power punch. The Protector Series caters to people looking to power their whole house or a more extensive list of essential items.

These machines have clean-burning engines with a continuous fuel choice between natural gas and liquid propane.

Special features included in this range include: