Some generators, but not all, can run 24 hours a day. For example, diesel is often a good choice if you want 24-hour support from your generator. Most diesel generators will run on a single tank for 24-72 hours but need to cool off for a few hours before refilling them.

However, gasoline is easier to get than diesel, especially from major transportation lines. Gas is usually better if you want to take a portable generator camping.

How Long Can a Diesel Generator Run Continuously?

Most diesel generators can run longer without stopping than regular gasoline or natural gas generator. On the lower end, you can expect many diesel systems to work for at least 24 hours, assuming they have sufficient fuel reserves. Many diesel generators have large tanks, which is a major limiting factor.

Occasionally, diesel generators will reach as high as 72 hours of continuous operation.

However, the downside to diesel generators is that they often need a longer cooldown period once they stop running. You can expect several hours of downtime to let the system cool off, whereas smaller gas generators tend to cool down faster.

How long a 12,000 watt (or 12 kW) generator runs on propane depends on its specifications and tank size.

Some 12,000-watt generators have tanks as large as 100 gallons, allowing them to run for about 36 hours continuously. That’s not a universal runtime, but it is one you can realistically expect to see when you go shopping.

How Long Generators Run On Gas

A tank of Gas

Most portable generators can hold up to three gallons of gas at a time, so they can run for 12 hours without refueling.

However, as with running on a single gallon, the actual timeframe will depend on how hard you push the machine. Some generators can only go for six hours on a single tank, but most won’t be below that because manufacturers know longevity matters.

One Gallon of Gas

With that in mind, a gallon of gas can often run a generator for more than four hours under a lighter load. This makes them highly reliable even if you don’t have too many gallons of gas in storage.

Most generators can run for about eight hours on five gallons of gas.

How Much Gas Should I Keep for My Generator?

As a good rule of thumb, it’s best to have 25-30 gallons of gas ready for your generator. This is about two days’ worth of fuel, depending on how hard you push it.

However, gasoline can go bad over time. Adding an appropriate fuel stabilizer can significantly extend the lifespan of your gas and minimize the potential for waste.

Difference Between a Standby and Portable Generator

A quality standby generator will usually work up to 30,000 hours, or 40 years, assuming you maintain it properly. This is about ten times as long as a portable generator.

How Can I Tell If a Generator Needs Care?

Generators usually have clear signs when they’re having problems. Some may only need to cool down for a while, while other generators will need maintenance or servicing. Common signs of needing care include:

Generators can slowly wear out even if you don’t use them, so it’s better to serve them before you use them again. Waiting until after you’ve used them for a few hundred more hours could lead to more damage.

What Is the Longest Lasting Generator?

Estimating runtimes for generators can be difficult because of real-world use conditions, but a few generators stand out from the pack.

One of the most notable options is the Super Quiet Diesel 6 KW generator from Central Maine Diesel. This unit’s regular version has a 150-hour runtime, while the premium option has a 735-hour runtime on a single tank.

These generators can run so long because of their unusually large fuel tanks. The biggest tank in this product line is 250 gallons, dwarfing that of most portable generators.

Here’s another great choice from Wen; 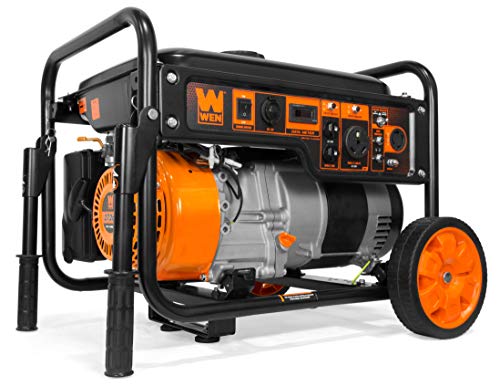 A Lot of Hours on a Generator

In most cases, having more than 1000 hours of use on a generator is a lot. This is entering the range where generators are significantly more likely to break down and fail, especially if you haven’t given them any maintenance.

How Long To Run a Generator for Maintenance?

You should run your generator at least once a month. Allowing it to run for a few minutes will ensure the liquids inside keep circulating. If you don’t run it often enough, ask someone to do maintenance before putting a heavy load on it.

If you want to meet national standards, test your generator between 30% and 50% of its maximum load, running it for at least 30 minutes.

This meets the NFPA 70 guidelines, which are National Electrical Code regulations applicable throughout the United States as a benchmark for proper use of electrical equipment.

How Long Does a Generator Need to Cool Down?

How long a generator needs to cool down depends mainly on its size. Most small generators will cool down within 1-2 hours, assuming decent airflow. Putting the generator in a shady location will help it cool down faster. Once it’s cool, you can service it and start using it immediately.

Mid-size generators usually take between three and four hours to cool down properly. This is too long for many people to go without power, so smaller and permanent generators are better choices if you need as much uptime as possible.

Mid-size generators can run for longer in one go than a small generator, but they’ll have to stop eventually. If you must have near-constant power access, consider buying two generators and switching between them.

How Much Does Running a Generator Cost?

Once you know how much fuel your particular generator needs per day, you can calculate the cost of running it at any time.

Don’t forget to include the costs for maintenance, including oil, replacement parts, and a mechanic’s time. You can reduce these costs by learning to maintain generators yourself.

Can I Put Gas in a Generator While It’s Running?

In most cases, no. It’s better to turn off the generator before you refuel it. The problem is that any gas spilling onto a hot engine may ignite. Companies want to avoid that, so they usually recommend turning it off to refuel.

If you need more time, it’s best to get a generator with a large fuel tank. Alternatively, a generator may have a refilling system so you can safely add more gas without the risk of an explosion.

Best Place To Put a Generator

The ideal location for a generator, especially if you need to run it for a while, is 20 feet downwind from your house. The exhaust outlet should point away from your house.

Running A Generator in the Rain

No. Rain can cause significant damage to portable generators. Between rusting parts and damage from cold raindrops splashing on hot surfaces, using generators in the rain is a bad idea unless it’s specifically designed for that.

Instead, try putting a canopy over the generator. This will keep the rain off of the generator, allowing you to run it as long as the rain doesn’t come in at a bad angle.